The U.S. dollar is at the heart of the international order, but stability is in jeopardy as the conflict between the U.S. and China intensifies. 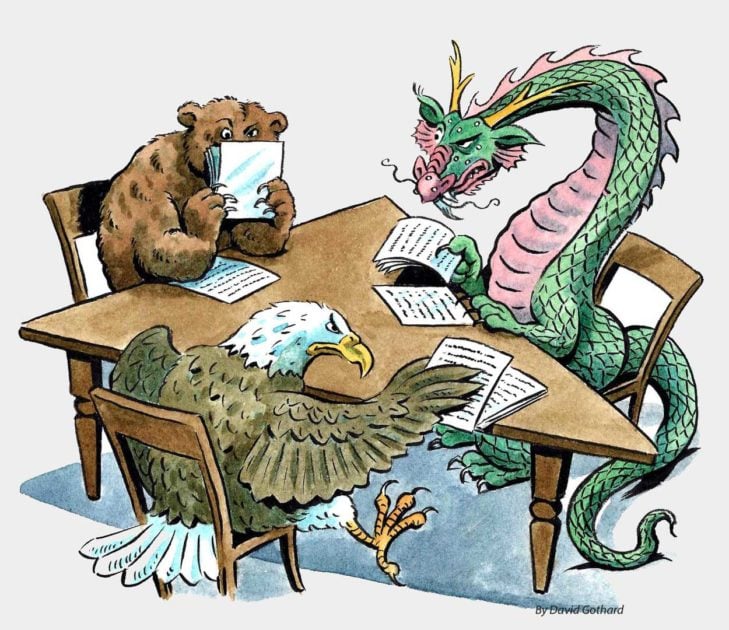 China, however, represents the greatest long-term strategic threat to a Free and Open Indo-Pacific and to the United States. Through fear and economic pressure, Beijing is working to expand its form of Communist-Socialist ideology in order to bend, break, and replace the existing rules-based international order. In its place, Beijing seeks to create a new international order led by China and with “Chinese characteristics”—an outcome that displaces the stability and peace of the Indo-Pacific that has endured for over 70 years.

The global dollar system is elegant, sublime and mysterious. The U.S. Dollar (USD) global reserve currency is built on the foundation of the massive U.S. economy with a rule of law, deep financial markets, stable political system and a powerful military capability.

A cornerstone of this system is the U.S.-Saudi Arabian alliance where the U.S. guarantees the secure flow of oil supplies to the world while the Kingdom prices oil in USD. Furthermore, the U.S. runs massive trade deficits with the rest of the world that have the effect of expanding global dollar currency throughout the system. Since energy is an input for nearly every good and service, one might argue that as dollars come into existence through major banks and the Eurodollar system, the USD has become a de facto commodity based currency and credit standard.

Lately, however, the USD has become relatively scarce, and this has potential consequences.

For economies that lack self-sufficiency in food, energy or commodities USD scarcity poses added risk. For example, China lacks the elements necessary to have a reserve currency. The Chinese Communist Party and People's Liberation Army (CCP/PLA) system has no reliable rule of law, lacks deep capital markets, has a large economy that is highly dependent on the West, and a non-convertible currency that lacks trust.

Furthermore, China has outgrown the Yangtze River basin's breadbasket and domestic oil production of 4 million barrels per day. China is now dependent on imports of energy to the tune of 9.3 million barrels of oil per day. In 2018, China imported nearly $250 billion of mineral fuels including oil.

The CCP/PLA mercantilist economic model is predicated on gaming the global trading system to accumulate technological, industrial and military power while maintaining huge trade surpluses with the United States and Europe.

To fund its needs China must maintain some combination of trade surplus, rely on foreign investors or have the yuan become a reserve currency.

A key vulnerability of the Chinese economy is that a large share is built around manufacturing goods for the U.S. and the European Union. In 2018, China exported $540 billion in goods to the U.S. or approximately 4% of Chinese GDP. If you assume that that 4% of economic activity drives another 10% to 12% of internal GDP, then you might say that the U.S. trade war could threaten up to 15% of Chinese GDP.

Furthermore, the approximate $420 billion trade surplus funds Chinese imports of energy, food and other commodities and components. A dollar shortage adds further pressure because it raises costs for the Chinese to do business and maintain its model.

Previously, the massive trade surplus with the United States, provided China with USD, but the total current account surplus has been declining. China is now in a race for dollars that are becoming increasingly scarce.

After attempting internal adjustments through lowering reserve requirement ratios for its banking system, China has moved into selling net dollar assets. Adding another dollar inflow conduit, the CCP has introduced a new Foreign Investment Law that will be effect in January 2020 and is designed to raise limits to foreign investment. Morgan Stanley estimates that China could move into a net current account deficit position for the 2020's relying on foreign direct investment for growth.

All of the internal easing through reserve ratio cuts does not seem to be leading to higher growth levels. Chinese fixed asset investment is at its lowest level in decades. Economic growth is declining. All the while, the Chinese credit system is expanding.

If U.S. and European multinationals move their manufacturing out of China due to security concerns, then the CCP could face a contracting economy colliding with a credit bubble wall. Without access to USD or readily convertible Euros, the Chinese Renminbi (RMB) could weaken significantly adding higher food and energy costs plus capital flight to the list of the CCP's economic problems.

Since the Chinese Yuan / Renminbi is not a reserve currency, relying on dollar availability could prove a challenge. What can China do? Attack the USD's global reserve currency status.

Petro-yuan contracts are now pricing oil in Renminbi. If China's oil suppliers in the Persian Gulf and Russia accept RMB for commodities, then China could have a relief valve on its need for USD. It would also potentially expand the Renminbi's share of global transactions.

In 2016, China and Iran entered into a strategic partnership. China has brought Iran into its sphere of influence and made it a client state. China gets to buy Iranian oil in RMB at an approximate 30% discount to average market prices. China is buying Iranian oil in a blatant violation of U.S. sanctions.

In addition, China is integrating Iran into its Belt and Road Initiative, basing troops, and transferring military arms and technology. Iran is challenging the U.S. security guarantee in the Middle East through supporting the Houthis in Yemen, funding Hezbollah and taking phantom control of Iraq via Muqtada al Sadr and other Shia. In other words, Iran is attacking the international order throughout the Middle East.

One might interpret the attacks on Saudi Arabia's Abqaiq and Khurais facilities as an attack on the U.S. dollar system.

China's All Domain, Unrestricted Warfare against the West and its allies has a pattern.

Now, we have Iran threatening the entire Middle East with a rapidly expanding nuclear capability under a Chinese and Russian security umbrella. This can be seen as an attempt to degrade and discredit the current international order of the U.S. dollar system. With plausibly deniable involvement, China conceivably provides financing through oil purchases, a security umbrella (thousands of Chinese troops are reportedly in Iran) and likely intelligence and drone technology to carry out these attacks.

In our recent writings we warned that once the West reaches consensus that China threatens the international order, it will make moves against the United States and these moves will have impacts for markets.

The attacks on Saudi Arabia may be linked to the broader conflict between the West and its allies versus China and its proxies. The largest one-day rise in the price of oil is a warning for all markets.

The conflict between the United States and China is intensifying and expanding. The U.S. dollar is at the heart of the international order. China wants to end and replace that order. Expect moves by both countries and their allies to have potentially out-sized impacts on currency, equity, commodity and fixed income markets.