Global Corporate Debt Is A Tinderbox

The IMF's latest Global Financial Stability Report estimates a staggering amount of global corporate debt-at-risk. But, is the problem contained? 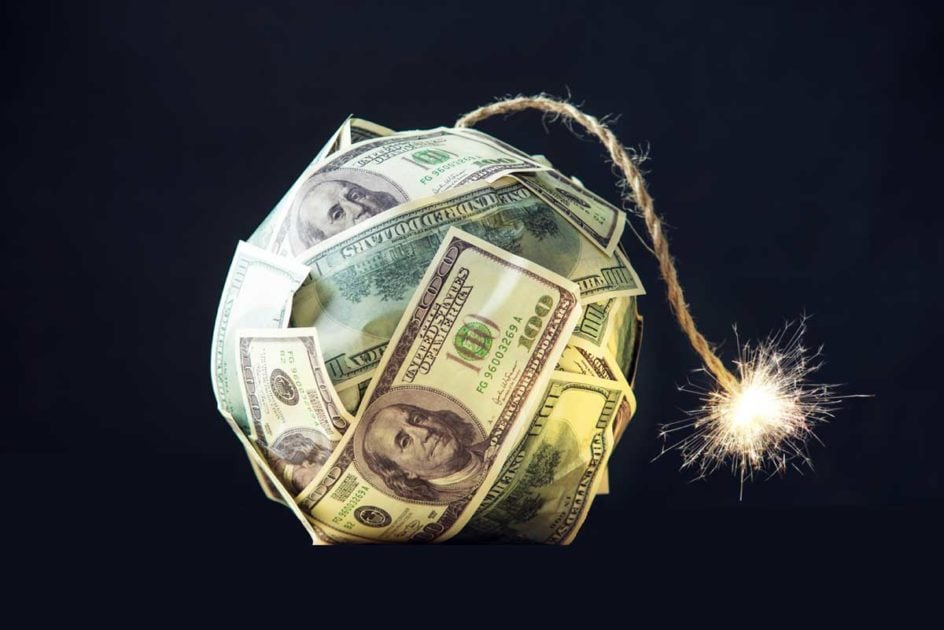 This is the largest and longest debt super-cycle in history. It has the ability to be crushed under its own weight, but a confluence of economic and geopolitical factors may provide a catalyst.

Interest rates are at the lows of recorded history.

U.S nonfinancial corporate sector debt is at a record.

Many areas of science ‐ computing, robotics, AI, biotechnology, genetic engineering, and materials ‐ appear to be accelerating. These advances may improve productivity but could be severely detrimental to jobs.

Excesses are myriad. Wealth inequality in the U.S. is extreme, while the same disparity is playing out between large corporations and small/medium enterprises (SME) where trade policy, regulatory burdens, and relative cost of capital has created a chasm.

There is a global shortage of U.S. Dollars (USD).

Great Power Politics is returning as the U.S. and China elevate their broad spectrum conflict.

And, this may all intersect in the global market for corporate debt – a multi-trillion dollar sum of bonds, loans, and packaged securities – with negative consequences.

Enter the International Monetary Fund’s (IMF) October 2019 Global Financial Stability Report: Lower for Longer (GFSR). In Chapter 2 of that report, the IMF reviews speculative debt in systemically important economies. According to the GSFR analysis, speculative-grade debt in the U.S. and China is nearly 50% of total corporate debt. The numbers are even worse in Italy, Spain, and the United Kingdom.

In the adverse scenario, the IMF analyzes global corporate debt-at-risk, which the report defines as interest coverage ratios less than one (EBIT/Interest Expense < 1).  A coverage ratio of less than one means that companies are not generating enough cash to make interest payments let alone amortize the principal.  According to the report, debt-at-risk across eight economies is estimated to rise to nearly 40% of the global corporate debt market, or a staggering c. $19 trillion.

Two of the most leveraged economies are China and the United States. Estimated debt-at-risk (ICR<1) in these economies is currently over 25% of GDP.

What do these high levels of debt-at-risk really mean? It means that survival for companies in this precarious position depends on a combination of cost reduction, revenue expansion, and additional capital usually in the form of equity or debt. If capital markets close or lending standards tighten, these companies may face a liquidity or solvency crisis. Additionally, if economic growth slows or new competition enters, revenue may be impaired. When the cycle turns, risk increases.

In the current economic growth environment the U.S. and China have approximately $10 trillion of this risky form of debt-at-risk. In the U.S. the riskiest debt is concentrated in the SME sector via direct and leveraged loans, private credit, and high yield bonds. ETF’s, mutual funds, and insurance companies may hold more of this paper. Foreign investors searching for yield also have exposure in this market.

In China, large (and probably mostly state-owned) companies comprise the biggest source for speculative risk, which is further complicated by explicit government support. But China is in desperate need of USD and has trillions of USD liabilities. Hence, many Chinese entities seem to be attempting to sell non-strategic USD assets, as well as, canceling dollar-intensive foreign projects.

Economic growth and funding conditions are now critical for the health of corporate debt.

The trend in global growth, as seen in global composite PMI’s, is not heartening.

Though spreads haven’t widened significantly, we might look to riskier credits for a leading indicator relating to less friendly funding conditions.

Bank share prices may be a rough indicator of expected profits related to bank lending and capital markets.

These price trends are a reason for concern. As the German export engine flounders and the Hong Kong economy suffers through unrest, banks with significant exposure to those regions have experienced a difficult environment.

According to the Bank of International Settlements in September, the gross notional value of over-the-counter (OTC) credit default swaps (CDS) covering below-investment grade and not-rated issuers was approximately $3 trillion. The OTC CDS market adds another dimension of complexity to the corporate debt puzzle.

Investors will have to keep an eye on the corporate bond sector. A change in funding conditions could lead to a dramatic pullback in capital expenditures and other cost reductions that feed into the real economy. This could fuel a feedback loop of financial distress and declining activity.

In this environment, later cycle dynamics may apply.